Here’s Why Cornhole is a Popular Pastime

Here's why cornhole is as popular as ever!

Here’s Why Cornhole is Still Such a Popular Pastime

Although cornhole in some form or another has been around since practically the dawn of time, in the last few decades, it’s gained a lot of traction. It’s a simple game that consists of tossing a beanbag into a hole a distance away, but despite its simplicity, it continues to work its way into the competitive hearts of thousands of Bostonians. Here are some of the reasons why. 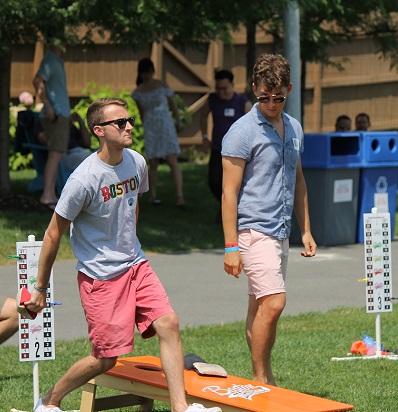 It’s a Social Game
Perhaps the main reason why cornhole is loved and played by many has to do with the social aspect involved. Both young and old come together to test their aim, strength, and skill, and it’s been at the center of numerous social gatherings since the 15th century. Everyone – whether they’re five or 95 – enjoys playing, whether they’re good at it or they’re terrible at it. Cheering one another’s successes (and giggling at mistakes) is all just part of the fun.

It’s Customizable
Though there are some fairly strict cornhole leagues out there – and there’s at least one league trying to bring their competition to the “big time” so to speak – when people play cornhole for fun at gatherings and bars, they can make up any rules they want. Sometimes there’s a fitness challenge involved in which the person about to throw has to predict the points he or she will get, and if that doesn’t happen, they have to do a number of pushups. In other cases, cornhole has been made into a drinking game that is especially popular among young adults.

It’s a Good Way to Meet New People
Sometimes, communities hold cornhole events in which people are matched up with teams at random, and this is one of the absolute best ways to meet people in your local area. This is especially true at a neighborhood block party or barbecue, and it helps to ensure that everyone has equal chances of winning. You might even consider participating in a social event that involves hanging out at a local pub or brewery and playing some cornhole with others. Either way, you’re sure to have a great time.

You Can Build Your Own Cornhole Boards to Practice
Cornhole is played on a set of slanted boards with strategic holes, and each player tosses a simple bean bag from a specified distance into one of the holes on the opposite board. You can buy cornhole sets outright, but they can be pretty costly. You can also have some fun making your own cornhole set to practice on in whatever color or theme you see fit. Even better, you’ll have your practice set stashed away for the next time you host a gathering at your home, which means you can get your guests involved, too.

Cornhole is one of those sports that is often enjoyed with a beer in hand at your local pub or in your backyard during a barbecue, but it’s gaining traction faster than ever. If you’re good at it, or even if you’re not, consider participating in joining local tournaments like BSSC Cornhole Classics that happen throughout the year with the largest in the Summer!

Related Content: Looking for a Cornhole Tournament in Boston? We Got You!

Back to All BSSC Spotlights

BSSC has 50 years of experience of being Boston's Way to Play! BSSC participants will continue to have access to the best events, sports leagues, ski trips and adventure travel in New England. Create your account to join in today!